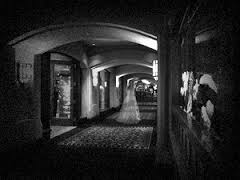 The “Castle of the Rockies” holds within it’s walls over one hundred twenty five years of history and with it, many strange tales of ghosts.  The story that continues to fascinate most  is what happened to a young bride from a wealthy family who died on her wedding day at the hotel in the early 1930’s.  On the day she was married in the hotels Grand Ballroom her husband and her walked down the hotel’s marble staircase leading to the reception hall.  It is said that she tripped falling down the long staircase and sadly she died from her fall.   However, another version of this story has a twist that many believe caused the fall.  It is said that the reason for her fall was that her dress brushed up against candles that illuminated the staircase and her gown ignited .  When the Bride struggled to put the flames out she stumbled and fell to her death down the marble stairs.

Shortly after this tragic accident took place it is was documented that hotel guests who never heard the story of the “Ghost Bride”, reported seeing a woman in a white wedding dress walking down the stairs and disappearing into the air. Other guests also reported to hotel staff members that they saw a woman with a dress that appeared to be on fire standing on a staircase and then abruptly disappearing into thin air leaving a cold chill as she vanished.  There have also been reports of a faint image at night of a bride seen dancing all alone in the ballroom in her wedding gown, and of staff hearing sobbing and noises from the bridal suite… when it is empty.

Now whether you believe in ghosts or not, one place you will certainly stay at on a CTE Canadian Rockies Tour is the legendary Fairmont Banff Springs Hotel. Your CTE Tour Director will share many more stories about the history of the Banff Springs Hotel, the Canadian Pacific Rail and much more.  They might even tell you a few more ghost stories.  Join us on a CTE Canadian Rockies holiday and stay at the most recognized Fairmont Hotel properties in the

Canadian Rockies where you will always enjoy breakfast and dinner included at these iconic hotels.  Oh, I should point out that there have been no recent reported ghost sightings at the Banff Springs Hotel  but who knows maybe you will be the lucky one who spots her next