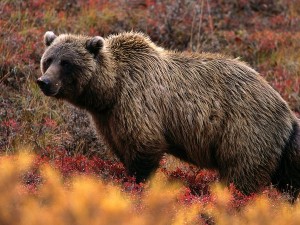 Everyone loves to hear the bear facts and here are some for your enjoyment…  Did you know that a grizzly bear is one of the most dominate, top of the food chain predators in North American but that much of this bears diet consists of eating berries, nuts, roots, leaves and fruit?  It’s true.  Bears also like salmon and during the salmon runs bears can often be found in fishing locations where salmon will run up river to spawn.  Why do they like salmon?  It is because salmon are a great food source for Grizzly bears that crave fats that will sustain them through the long winter months they must face.

How did they get their name Grizzly Bear?  They are called this because of the white tips of fur that can be found over the bears powerful front shoulders.  The tips of fur appear to have a grizzled color and thus the bear was named Grizzly bear because of these white grizzled tips of fur.  Grizzly bears can also be called Brown bears, especially up in Alaska.

Grizzlies once lived in much of western North America and even roamed the Great Plains. European settlement gradually eliminated the bears from much of this range, and today only about 1,000 grizzlies remain in the continental U.S., where they are protected by law. Many grizzlies still roam the wilds of Canada and Alaska.

CTE has the best luck spotting Grizzly bears on our Canadian Rockies tours when we take the old highway from Banff to Lake Louise.  Not only is it a more scenic road that wraps around the Bow Valley it also follows the Bow River via the back country to Lake Louise with opportunities to spot more wild life.  Take a CTE Rockies tour and learn more about wildlife in the Canadian Rockies – we will also pull the coach over when safe to do so in an effort to allow our Guests to get lots of great photos safely from inside your deluxe touring coach.